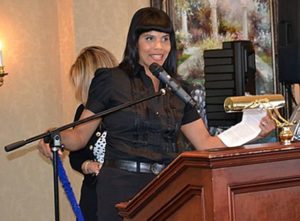 Having An Illness Doesn’t Mean You Can’t Be Productive

Lisa Cohen is an inspiration. She started the website, Rockstar Women With MS after writing the best selling book, Overcome The BS of MS. Lisa is a woman who didn’t let multiple sclerosis stop her from living a full life, tempting as that may have seemed…

Lisa, can you please tell us in your own words what happened  in 2001 that changed your life?

The diagnosis that I had multiple sclerosis (“MS”) came in the summer of 2001. My life immediately changed. I was as an “escaped” lawyer who finally was following my passion for photography and indie music promotion, but suddenly it all came to a halt.

The shock of that must’ve been difficult initially…

Yes, the shock of being diagnosed with MS and the real possibility of not being able to do the work I finally was enjoying was a difficult pill to swallow.

I had physical impairments that made like life difficult. Extreme fatigue, numbness and mobility problems, coupled with optic neuritis made photography and normal activities that I performed on a daily basis very difficult.

Very quickly, I began envisioning my future with fear. I wondered what my life would be like in the future. I started “living small,” believing that it would be better to limit my activities and begin living “safer” with my illness.

That’s perfectly understandable, to withdraw because of what you are dealing with… How did it affect you mentally?

I didn’t think it was reasonable to have “dreams” or to attempt to continue to live as the person that I “used to” be, even while there were times when I felt better, when the symptoms were in remission. I simply gave up, and I lived a small, “less than” life for a few years.

I felt like I was invisible, isolated and miserable.

I’ve gone through some tough periods both physically and mentally.

How, then, did you emerge from your isolation?

I fought through it because I am a fighter by nature. MS took hold of my life for years, but suddenly I began to understand that I didn’t have to stop becoming the person I wanted to be. I desired to live a life that rocks instead of a life on the sidelines.

The day I realized that, I began my journey to live a full and empowered life…a “rockstar” life, which to me means making conscious, active life decisions instead of autopilot decisions that were chosen by default or simply out of resignation because I had MS. With some stops and starts, I was finally able to do that after I felt that I had been stuck for so many years.

What was it that they that made you decide to turn your life around and start your new website? What was the catalyst that set that into motion?

I was meeting other women with MS with different ages, ranging from their early 20s to their 40s and all different stages of life–and what they were all saying to me was that they weren’t going to support groups anymore because there weren’t support services around them that they felt were helping them in any way to actively manage what they were going through.

Everyone was sitting around in pity party mode, and that just made them feel depressed and worse, or the other thing I was hearing is that they didn’t feel that they fit in, which is why I stopped going to the support group I went to.

I remember sharing what projects I was working on at the time, and the leader of the group leaned over and said to me, “It’s ok, it’s ok, you don’t have to do all those things. You’re sick.” And I thought,  “I’m never coming back here again.” I didn’t want to be in that kind of mindset.

I created Rockstar Women With MS for the same reasons that I wrote my book “Overcome The BS of MS”: I learned that there was a common thread in both my own experiences and those of women with MS that I’ve spoken to across the US and internationally––Women are feeling like they’re not finding support to help them actively manage what they’re experiencing in their life with MS.

From my own personal experience and from what these other women were telling me, I truly believed that there was a real need for someone to provide an alternative space and try to answer the question of “What concrete things can I actively do to improve the quality of my life with MS?” I created Rockstar Women With MS to be that alternative. My goal is to develop it into a space where women can be both empowered and supported in living with MS and realize that they’re not alone in going through it.

I chose “rockstar” because I notice when musicians are on stage and they are in their particular zone, there is a certain element of “this is my space, this is where I’m supposed to be; this is a match for who I am, and a match for my personality,” plus they have put in the effort to get there, so after some effort and consciously deciding this is what works for me and now I’m here and it feels great, that’s what I mean by “rockstar,” because that feels very different than passively ending up somewhere by default all because you’ve been bounced around by circumstances at the mercy of your condition.

THAT feeling of having made some active or conscious decision or choice in where you are or where you are going and having that be a match for who you are, and a match for your personality. That’s the kind of thing I would love for women with MS to be able to feel like. So that you are where you want to be and not where the MS wants you to be.

I am hoping that this idea of being able to “Overcome the BS of having MS” will allow others to live their own “rockstar” lives without regard to how they feel or how much time they’ve already “lost.” It is my my mission. I wrote the Amazon #1 bestseller “Overcome The BS of MS” and founded the global community Rockstar Women With MS to support women with MS in leading active and more empowered lives.

——————————–
Lisa may as well be a rock star. Recently, she has been featured on the Thomson Reuters electronic billboard in Times Square and in ad campaigns for the National Multiple Sclerosis Society. Not only that, but she has a B.A. from Columbia University, a J.D. from Columbia University School of Law, and Certificates in Digital and Graphic Design Production and Digital and Graphic Design from New York University School of Continuing and Professional Studies. Whew!

What we find inspiring about Lisa’s story is that she had ample opportunity to give up, and in fact did for a time, but after LITERALLY falling seven times, she ended up rising up eight, and continues to do so.